All Collections
FAQs and Troubleshooting
What happens when a prospect replies to my email?

What happens when a prospect replies to my email?

What happens when a prospect replies?

Written by Nick Steeves
Updated over a week ago

When sending emails using PersistIQ, you might be wondering, what exactly happens to the status of your prospects once a response is received from their end?

Let's take a look at some of the common questions and scenarios;

What happens when a prospect replies to my email?

By default, when a prospect replies to your email, they are automatically marked as finished. The Campaign State  allows you to see the Prospect's Status within a campaign. 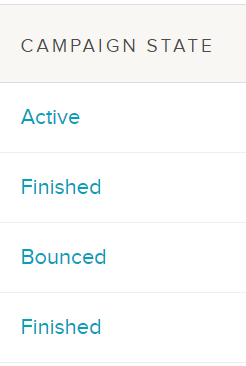 If the Prospect Status is marked as "Finished" or "Replied" you can click on their status within a campaign and check "Resume" Doing so will change the status to "Active"allowing the prospect to continue the campaign.

What if the reply is an out of office or automated vacation reply?

If there is an OOO (Out of Office) or Vacation response, our system recognizes it and automatically pauses the campaign for that prospect.  In order to avoid polluting the data, OOO responses are not counted as "replied" . You can easily resume or un-pause the OOO prospects under campaign's prospects tab. Keep in mind that this depends on your trigger setting. We suggest that you choose "Paused" for OOO replies.

When a prospect is in more than one campaign and replies to an email in a single campaign, what is their state in the rest of the active campaigns?

PersistIQ has a unique and intelligent inbuilt feature than can track each state of the user with precision. In the scenario below, we can see that a prospect is included in three separate campaigns (A,B and C) . If the prospect responds to an email from campaign A, the following examples show the different states that will be visible in all three campaigns;

What if a prospect is in several campaigns and sends an email to the sender outside of a campaign?

PersistIQ not only detects responses within a campaign but also gives you the advantage to track emails sent outside of a campaign. Given the scenario previously used, (Campaign A, B and C) if the user sends an email to the sender outside of their campaign, they will see the message " Finished- unrelated reply" under the state of the prospect as visible below;